Marriott Rewards have published their new award charts which come into effect from August 1. As previously noted, on that date the existing Marriott Rewards, Starwood Preferred Guest (SPG) and Ritz-Carlton Rewards program are being merged into a single program.

The number of points required for a redemption will be largely determined by the category of the hotel.

Initially, hotels will initially be placed into one of 7 categories, with an 8th category being added in 2019. At the time category 8 is introduced, the affected hotels will see an increase of 25,000 points per night.

The following table shows the award charts that Marriott have published: 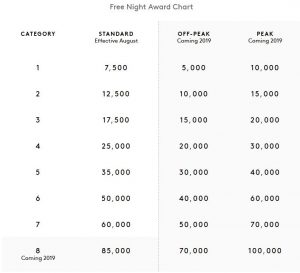 Wen comparing the new and old programs, you need to consider the change in point value. For Marriott Rewards, it is easy – the value in the new program is the same as the old.

For SPG folk, however, there is a change in point valuation If your points are coming from SPG these will be converted at a ratio of 3 points in the new program for each SPG point. This also flows through to redemption rates.

The upshot of that, is that any points requirement in the current SPG program needs to be adjusted to reflect this change in points value. As an example, the new Westin Hotel in Perth currently has award nights at 12,000 points per night. After the conversion, this would be the equivalent of 36,000 points per night.

With that in mind, Marriott calculate that 52% of the hotels will require fewer points while 31% will require more. As an example, of a hotel decreasing in rates, the Westin Perth which is currently the equivalent of 36,000 points, will drop to a standard rate of 35,000 points per night.

Marriott have published a handy table of the point requirements under the new system. This allows you to filter by hotel or region to give you a feel for how the changes will impact you.

If you have an award in mind, it may be worth checking the table to see if you should wait until after August 1 to make your redemption.

On the surface, this doesn’t look as bad as many had predicted. Certainly, for the hotels I am likely to stay at, nothing too dramatic has happened.