IHG Rewards has decided to award Ambassador members a 6-month extension on their memberships. This extends the initial 3-month extension that was granted to members back in April.

This further extension probably reflects the effects of the pandemic on travel will last more than three months in many regions of the world.

IHG Rewards has announced that it will be extending status by one year. As a result, members will now keep the status they earned in 2019 for two years. As such, your status is will be good through to early 2022.

This status extension follows their earlier announcement that they would reduce elite status requirements in 2020.

In good news for Spire members, the extension will include the Choice benefit. As a result, Spire members will be able to choose between 25,000 Points or gifting Platinum Elite.

The extension will be reflected in members’ accounts over the coming weeks.

Last month, IHG Rewards announced that it is lowering the elite status requirements for 2020. The reduction is a recognition that many members have had their 2020 travels curtailed.

The reductions of at least 25%, affect both the Elite Qualifying Points and Night requirements. In addition, each level sees a proportionate reduction.

The following graphic, from IHG, shows the changes: 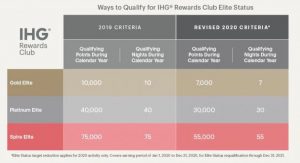 This particular change affects all members worldwide, except for those in Greater China which have a separate policy in place.

Initially, IHG Rewards were offering a 3-month extension, however, they recently extended this to a total of 6 months. Due to the way this was implemented, it may show up as 2 separate extensions of 3 months each in members’ accounts.

With the continuing cuts in travel, more and more programs have been making adjustments. Some are giving outright extensions, while others are making other adjustments. Initially, IHG fired off with reduced tier requirements. However, as the current situation looks to continue for a while has now opted to extend status for another year.

For someone that still gets to travel, this can open up an opportunity to go up a level. Having said that, not many of us are in a position to travel at the moment.