Over the last week or so, Macquarie has been advising holders of a range of cards that they will no longer earn points when making payments to the ATO, or when making BPay payments.

The changes, which are set to take effect from May 11, 2016 will affect the following cards:

The specific wording of the messages has varied, but pretty much contained the same message. For the Woolworths Money Qantas Platinum Card, the advise was similar to the following screenshot: 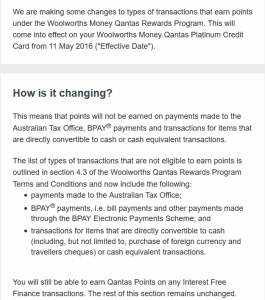 At this point, there has been no reports of changes to the Jetstar Mastercard, another of the Macquarie run cards.

With the addition of  the words “Payments made to the Australian Tax Office” as being not eligible, Macquarie has joined a number of card issuers that have clamped down on points earning when paying the ATO.

This will impact not only those that make quarterly BAS Payments, but also other ATO payments, such as PAYG Instalmants, HECS payments and general ATO payments.is

No more points earn from BPAY

Macquarie has joined the ranks of a few banks that exclude BPay payments from earning points. For a large number of people, paying bills via BPay has been an easy way of boosting ones points balance. In many cases, it will still be possible to pay directly to the merchant to gain the points, although this is not always as convenient.

The Macquarie Qantas cards are joining the Woolworths Money card in having a tiered earning level applied to the points.The tiers are as follows:

According to the Macquarie website, the tiering will apply to new customers from June 20, 2016