Beginning April 30th, Virgin Australia and South African Airways (SAA) are extending their partnership allowing Velocity members the ability to earn points and status credits on South African Airways (SAA) marketed and operated flights. This extends the current arrangement that provided the ability to earn points on SAA, but only when travelling on the VA codeshare. 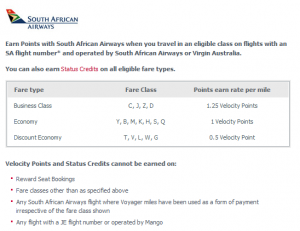 As part of the celebration of the new partnership, there is an opportunity to earn double points on all eligible Virgin Australia and South African Airways flights. In order to take part in the double points opportunity, you will need to register on the Velocity website, by 9 May 2015. [Link removed]

For the purposes of the promotion, an eligible flight is any SAA operated and marketed flight, SAA codeshare flights operated by Virgin Australia, and flights VA5020-5069, SA7251-7266. To be eligible, the flights need to be flown between 16 May and 31 July, 2015.

As part of the partnership, Velocity points can be redeemed for flights with South African Airways. The redemption charts have been updated, and, unfortunately, South African Airways flights are found using the more expensive redemption schedules (shared with the likes of Singapore Airlines and Air New Zealand). As an example, a one way flight from Perth to Johannesburg will set you back 45,000 points in economy and 95,000 points in business class.

By comparsion, Etihad which on the lower award rates requires only 35,000 points for economy (or 70,000 points for Business) for a Perth to Abu Dhabi. Thus, redeeming on South African Airways comes at a price premium to some of its other partners.

One obvious omission from the table is the lounge in Perth. While SAA use the Qantas lounge in Perth, at one level it is understandable that it is not included. However, access to the lounge is available to Velocity Gold and Platinum members travelling on Etihad services.

This latest extension essentially completes the partnership that was announced late last year. The ability to earn and burn on the two airlines is arguably overdue, and now allows members of the two ailines respective programs to get the most out of this partnership.