Situated at 900 Hay St, the hotel will consist of 250 rooms. In the past, the site was occupied by Musgroves Music, a musical instrument shop dating back to 1922.

The hotel sets out to be a new international food and beverage destination. The venue will be centered around the hotel’s pool area, located on level one, directly above Hay Street. It will be serving Mediterranean cuisine, together with a range of cocktails. 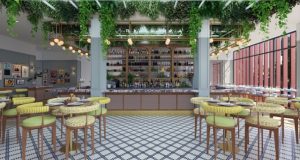 The Art Series Hotels came under the Accor umbrella following the acquisition of the Mantra group. At this point, the hotels do not participate in the loyalty programs. As a result, there are no opportunities to earn points or receive status benefits for the time being.

Accor Chief Operating Officer Pacific, Simon McGrath, said the opening of this hotel will mark the arrival of Art Series Hotels in Western Australia and represents the Group’s strategic direction to grow the brand.

The Art Series portfolio includes a range of hotels, mostly on the eastern seaboard. Hotels include The Olsen, South Yarra; The Blackman, St Kilda Road; The Cullen, Prahan; The Larwill, Parkville; The Chen, Box Hill in Melbourne.

Other hotels include The Watson in Walkerville, South Australia, and The Johnson and The Fantauzzo in Brisbane, Queensland.

Further details about the Adnate may be found on the Art Series website.