Le Club AccorHotels has set up a page on their website dedicated to the change, and is worth a read to get the full details.

In 2017, Le Club Accor Hotels will be introducing the concepts of Reward Points and Status Points. This is a change from the current situation, where all points are created equally, and are just Points.

As mentioned, at present all points are created equally – so any point you earn counts towards status. It does not matter where those points come from – hotel stays, the Places application, or even by doing surveys, every point count towards status.

The following graphic shows this. 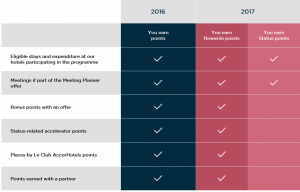 It’s not all bad news – to help compensate for the move toward Status Points, Accor will be lowering the number of points required to reach a status threshold. While, there is a reduction, it does not go all the way to compensating for the change in the calculation methodolgy. This changes to thresholds are shown below:

This effectively means that the Status Points path to status is basically a revenue based system, calculated in a roundabout way through the granting of Status Points. For Platinum, this iwll require (at most hotels), an expditure of 5,600 Euro over the year (Ibis Styles will require double the expenditure, as the points earn is half)

Earned status valid for the next Calendar Year

Another significant change is moving onto a Calendar Year calculation for status. This bring it into line with other loyalty programs, and is a step away from the rolling year method used at present. During a calenedar year, and status earned will be valid for the current year, and the full next calendar year.

As part of the transition, any status that is set to expire during 2017 will automatically be etxtended until the end of 2017.