Virgin Australia has revealed a trial of new Business and Economy seating. The new seats have been fitted in two of its aircraft in order to gauge passenger feedback. Feedback from frequent flyers will inform their decisions on the layout of future aircraft.

Overall, the new seats are designed to improve the comfort of passengers on board. However, in doing so, there is a slight reduction in the number of seats overall. While Business retains the same number of seats, Economy loses a row, with the number of Economy seats falling from 168 to 162. 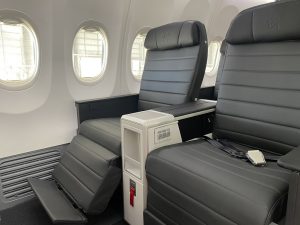 The new layout retains 8 seats in Business – 2 rows in a 2×2 layout. The big highlight of the new seat is an additional 7 inches of recline. Other improvements include:

It’s not just Business that sees improvements. Virgin has laid out a set of improvements to the Economy cabin. There is, however, one less row of seats compared to the current layout.

It’s good to see Virgin Australia continue to improve the creature comforts of their passengers.

[Correction: We originally stated that the number of seats was remaining the same. In fact, Virgin Australia is removing one row of Economy seats]