Last month, the federal government announced that it would be subsidising a range of domestic flights. Under the arrangements, Jetstar, Qantas, and Virgin would provide half-price airfares on a number of routes.

Qantas and Jetstar will be offering half-price tickets to 15 destinations across their networks. Half price fares on the two carriers include

In order to take advantage of these fares, head over to the Qantas website between 1 April 2021 and 31 July 2021 (or until sold out) 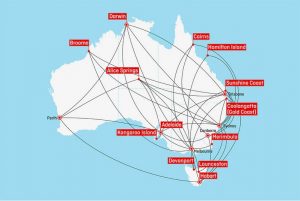 Virgin Australia is also offering a number of half-price fares. The seats will be discounted by 50 percent off Virgin Australia’s February lead-in price of tickets. They will be available between 1 April – 31 July 2021, for travel from mid-April to 30 September 2021.

Virgin will be offering the following fares

Note that these are ‘Getaway’ fares. In the Velocity program, these earn 5 Velocity Points per dollar, with no additional status bonus. In addition, they will earn between 7 and 15 Status Credits per one-way flight.

Head over to virginaustralia.com to make a booking.