Qantas Frequent Flyers will now earn more Points and Status Credits when flying American Airlines to North America. In addition, a range of flights within North America will also receive a boost.

The move follows approval of a joint venture between Qantas and American Airlines. The previous reductions came into play when the original joint venture was rejected.

Qantas have made the changes in two places.

Firstly, they have adjusted the Partner Earning tables. Form most flyers, this will give the most significant earnings boost.

In addition, Qantas has unwound some of the changes that had been made to the fare classifications. For example, some Discount Economy fares, are now classified as Economy.  This could give you a further boost to your earnings.

Qantas has updated its Partner Earnings tables to reflect the new earnings that will apply from 1 October 2019. The changes affect both the Points and Status Credits earnings of the affected flights.

For example, consider a flight in business between Sydney and Los Angeles. Such a flight will see an you earn 13,500 Qantas Points. This is 4,125 Points more than the 9,375 Qantas Points you used to earn. Even better, your status credits haul will double – up from 90 Status Credits to 180 Status Credits.

The updated table for travel from Australia is shown below. 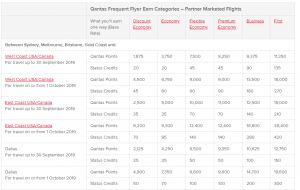 If you are flying American Airlines between New Zealand and the US, then the following changes will apply:

On routes within North America, there are some changes if flying between the US and Canada, or between Dallas and New York/Boston.

Between Dallas and New York/Boston

In addition to the earning table, Qantas has also made changed to some fare classifications. These changes coming into effect today are:

For the most part, these undo changes that have been in place since 2017.

If you are flying American Airlines, and credit to Qantas Frequent Flyer, you may be in for additional earnings. In some cases, you could earn twice as many Status Credits from today.

This may have an effect on which program you should credit any American marketed flight to, It is, however, an individual thing, and you should consider your own flying patterns to determine if you need to make changes.