You are at:Home»Reviews»Flight Reviews»Virgin Australia Perth to Melbourne The Business Review

It doesn’t happen often, but every now and then a company manages to ‘surprise and delight’ me. And so it was on a recent flight from Perth to Melbourne on Virgin Australia. A surpise upgrade to The Business.

It was all uneventful to begin with. (Uneventful, that is, if I ignore my mistake of dropping off the hire car on the wrong side of the airport). Check-in was smooth, and soon I was relaxing in the Virgin lounge awaiting my flight back to Melbourne.

Boarding was called, so I trekked down to the gate to board my chariot. Got to the front of the queue, handed my boarding pass over, and a ‘beep’ from the machine. A message came up, I had been moved seats. No big deal – not the first time it has happened, and the agent advised me I still had an aisle seat. My boarding pass updated, I continued on my way.

At first it didn’t register, but as I walked down the aerobridge, it hit me. My new Row 5 seat was actually in Business. Not only had I moved seat, I had moved up a cabin, out of Economy and into The Business. To say I was rapt, would be an understatement.

Virgin Australia introduced ‘The Business’ to its A330 fleet last year. Unfortunately, until now, actually managing to experience it has eluded me. Sometimes the A330 has been subbed out, and I have found myself on a 737. Not that there is anything wrong with a 737. It’s just the the difference in Business between a 737 and an A330 is quite stark.

The Seat and the Cabin

Being a rather late upgrade itno the cabin, I ended up at the back of the cabin, in row 5. Nothing wrong with that, of course, anything is going to be better than economy. I took my seat, and started on a voyage of discovery to find all the gadgets that go with a Business Seat these days.

A failry prominent feature of the seat is the video screen in front of you.  It’s a 16 inch touchscreen, which is a nice size for the distance it is from your seating position. 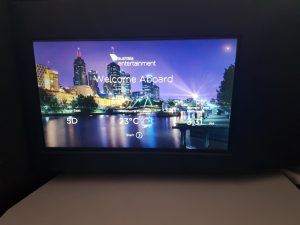 A video screen needs controls and headphones. This took a little bit of hunting around – opening various little storage areas arond the seat.After finding the headphones, and plugging them in, I selected a movie for the flight. The sound through the headphones was quite good – no complaints from me in that departmemt.

It’s not just the seat that is better in The Business. It’s the Catering is as well.

Pre take off, a drink is offered. Out of the various choiced, I opted for the champage. In addition, the printed menus were also handed out. At a later point the Flight Attendants would come back to take orders.

Catering comes in a few versions. There is the full three course A-la carte menu. There is a streamlines Express Menu, and finally a pantry menu (which is mostly snacks). The Menus are shown below: 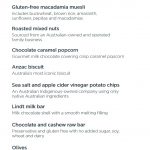 I opted to go with the A La Carte menu. The Attendants walked around the cabin taking orders. Being in the last row (and perhaps being an upgraded passenger), I was left until last. Initially, my first choice was unavailable, so I chose my second. Five minutes later, I was able to switch back to my first choice – I guess they did some sort of recount of the meals.

The dishes were brought to my seat in turn, and overall I found the service very good. The speed was neither too slow or too fast, and the spacing of the courses was fine. The dishes I had are shown in the photos below. 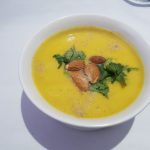 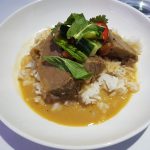 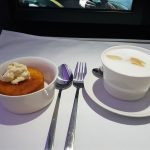 The dishes loaded did vary a little from the menu. Theire was pumkin soup in place of vegetable soup, and dessert was an orange cake. That aside, they were all delicious dishes. The Nespresso Coffee was good too – certainly an improvement on the normal airline served coffee.

By the end of the meal, there was only around an hour of filight time left. So I flicked through a few of the options available on the entertainment syste,m. While there were a range of options, I don’t think the range is as extensive as found on a Qantas flight.

This was my first foray into The Business on Virgin. I found it a good experience – and the A330 Business Class offering is on a par with the Qantas offering on the same aircraft.

It is a substantial improvement on the product it replaced, and it is much better than the business offering on the 737.