You are at:Home»Reviews»Flight Reviews»Qantas A330 Business Melbourne to Perth Review

It has been two years since I last took a look at the Qantas Domestic A330 Business offering. Back then, it was a Perth to Melbourne service. This time around, I thought I’d take a look at the service in the other direction.

Booking the Qantas A330 Business

One of the issues of flying Business in Australia is that it is expensive. For example, a one-way Melbourne to Perth could easily cost over $2,000.

Basically, you have two options using your points. Firstly, you can book an Award ticket outright. If an Award seat is available, a Business booking from Melbourne to Perth is 41,500 points. The problem for me was that there was no award seat available.

The other alternative is that you can upgrade from Economy.

As I was booked on a Flexible Economy ticket, an upgrade to Business was 10,900 Qantas Points. If you are on a discount economy ticket, the number of points required skyrockets to 25,000. It can be seen that the upgrade from Flexible Economy is better value. Of course, this means that you have paid more cash for your ticket to begin with.

If you are making a Domestic Upgrade Request ahead of time, there are a few things that could happen. Firstly, the upgrade could be granted straight away. This happens in the case where there is an award seat available.

On the other hand, if there is no award seat available, you go on the waitlist. In this case, this is what happened, and I had to sit and wait until closer to the day.

Fast forward a few weeks, and an SMS arrived advising me of the success of my upgrade request.

Once my flight was called, I made my way to Gate 23 for boarding.

Settling into my seat, I was soon offered a pre-departure drink. I had a choice of water, and what turned out to be a mix of strawberry and guava. I took the juice – and wished it could still be the sparkling cabernet they used to serve.

After the usual formalities, we were away. Once up in the air, it was time for the drinks service. I opted for sparkling wine – in this case, a Grant Burge sparkling as on offer. This was served with almonds. 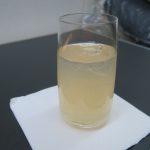 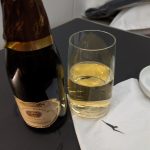 First Drink in the air

The A330 Business seats are set in a 1-2-1 configuration. This results in all seats having direct aisle access, so you don’t have to climb over anyone to get out.

Each seat reclines into a fully flat-bed. The seat also features a side table and a slide-out meal table. There is plenty of storage areas ro be found. There is a storage area below the side table for larger items and above the table for smaller personal items, In addition, you will find a mirror, personal light, and USB charging points. 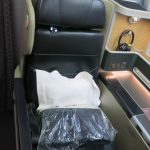 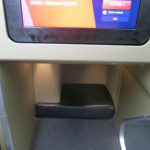 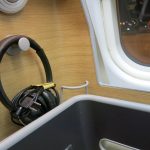 In-Flight Entertainment is provided on a large, 16″ screen fixed to the seat in front of you. There is limited ability to tilt the screen up and down.

The menus are relatively easy to navigate, and there is a good variety on offer. Among the offerings are movies, documentaries, box sets and so on. 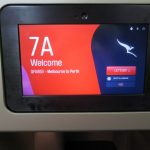 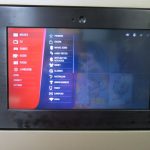 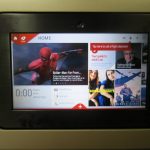 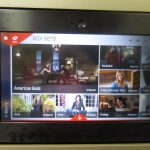 In Business, you are provided with a set of noise-canceling headphones. These are a big improvement over the Economy sets, and filters out much of the cabin noise.

Food orders were taken shortly after take-off.  The menu was a typical Qantas Domestic Business menu and offered two choices for starters and four dishes for mains. As is often the case, the soup is duplicated in both the starters (small bowl) and mains (large bowl)

The food service proper started about an hour after take-off. I had opted for the crab starter, and this was followed by pork fillet. 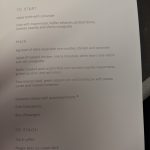 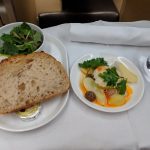 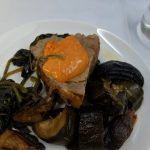 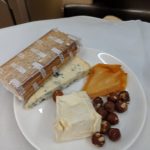 After the meal service, I settled in to watch some shows on In-flight Entertainment. I discovered Qantas had all seasons on Game of Thrones, so I elected to watch what I could of Season 1.

While I watched, the crew would stop by from time to time to check on my wine.

All in all an enjoyable flight.