As part of the many people that have to get from one city to another city in time for Christmas, I recently booked a trip to Perth on Virgin Australia, for the day before Christmas.

Now sometimes things happen when you travel, and a cancelled flight meant that Virgin shuffled my flights around. One of the end results was that the trip across the continent moved from an A330 service to a 737 service.

So, not quite the same hardware as the bonus upgrade to business in an A330, as I had last year. While I have had 737 business flights around the east coast this was my first time for a transcontinental flight. I thought it might be worthwhile having a look at my experience on the flight.

First up, there is the seat, Now, there really is no comparison between Business in the A330 and Business in the 737.Having said that, the small cabin of 8 seats usually makes for attentive service.

If you’ve been aboard a Virgin Australia 737, you would probably be familiar with the layout of the Business Cabin. . In the 737, Virgin Australia have two rows of recliner seats. Each row consists of 2 seats either side of the aisle, for a total of eight seats.

The seat map tells the tale:

The seats themselves are leather covered recliners. They provide decent legroom, with knees staying well clear of the seat in front. 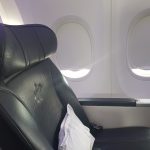 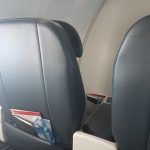 For entertainment, they supply a tablet, allowing a selection of movies, documentaries and music from the onboard WiFi streaming service. In economy, you would need to provide your own device, in business, you are supplied one. 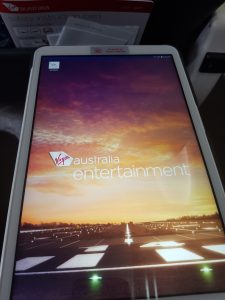 So, the seat may not be as good as the A330, but what about the service.

It starts off with a pre-departure glass of sparkling wine. Menus are also handed out, so that you can select your choice of meal. 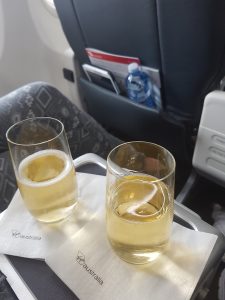 Being a trans-continental flight, it comes with a full three course offering. Unfortunately, the steamed Barramundi option was already crossed out on the menu – which left two options. 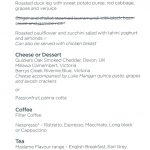 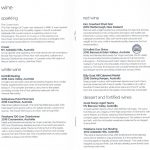 The courses are delivered one by one, as you would expect. 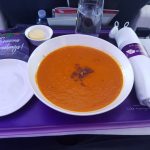 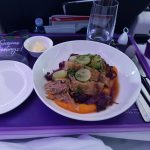 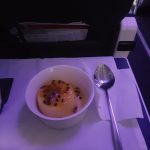 One issue with the entertainment being a tablet, is that there is nowhere convenient to place it while having the meal.

If you consider the sear, then the 737 business class is not as good as you would get on the A330s. Having said that, I find them quite good.

The service is, in my experience, still quite good. I have also generally enjoyed the Luke Mangan meals that are served, and this flight was no different.

On the shorter east coast services, the meal service is not typically the full three course offering, but is usually something reasonable.

I have taken several Business Flights on Virgin, using both cash and points to get there. Some may think that it is not the best use of points. I tend to think, if you need to get around domestically, and you have the points, then there is no shame in it.